Joint Statement Of Current Law On Religion In The Public Schools

Organizations (see signatories below) that span the ideological, religious, and political spectrum stand together as they make this statement of consensus on current law regarding religion in public schools.

1. Students have the right to pray individually or in groups or to discuss their religious views with their peers so long as they are not disruptive. Because the Establishment Clause does not apply to purely private speech, students enjoy the right to read their Bibles or other scriptures, say grace before meals, pray before tests, and discuss religion with other willing student listeners. In the classroom students have the right to pray quietly except when required to be actively engaged in school activities (e.g., students may not decide to pray just as a teacher calls on them). In informal settings, such as the cafeteria or in the halls, students may pray either audibly or silently, subject to the same rules of order as apply to other speech in these locations. However, the right to engage in voluntary prayer does not include, for example, the right to have a captive audience listen or to compel other students to participate.

3. The courts have reached conflicting conclusions under the federal Constitution on student-initiated prayer at graduation. Until the issue is authoritatively resolved, schools should ask their lawyers what rules apply in their area.

5. Students may be taught about religion, but public schools may not teach religion. As the U.S. Supreme Court has repeatedly said, “[i]t might well be said that one’s education is not complete without a study of comparative religion, or the history of religion and its relationship to the advancement of civilization.” It would be difficult to teach art, music, literature and most social studies without considering religious influences.

The history of religion, comparative religion, the Bible (or other scripture)-as-literature (either as a separate course or within some other existing course), are all permissible public school subjects. It is both permissible and desirable to teach objectively about the role of religion in the history of the United States and other countries. One can teach that the Pilgrims came to this country with a particular religious vision, that Catholics and others have been subject to persecution or that many of those participating in the abolitionist, women’s suffrage and civil rights movements had religious motivations.

6. These same rules apply to the recurring controversy surrounding theories of evolution. Schools may teach about explanations of life on earth, including religious ones (such as “creationism”), in comparative religion or social studies classes. In science class, however, they may present only genuinely scientific critiques of, or evidence for, any explanation of life on earth, but not religious critiques (beliefs unverifiable by scientific methodology). Schools may not refuse to teach evolutionary theory in order to avoid giving offense to religion nor may they circumvent these rules by labeling as science an article of religious faith. Public schools must not teach as scientific fact or theory any religious doctrine, including “creationism,” although any genuinely scientific evidence for or against any explanation of life may be taught. Just as they may neither advance nor inhibit any religious doctrine, teachers should not ridicule, for example, a student’s religious explanation for life on earth.

7. Students may express their religious beliefs in the form of reports, homework and artwork, and such expressions are constitutionally protected. Teachers may not reject or correct such submissions simply because they include a religious symbol or address religious themes. Likewise, teachers may not require students to modify, include or excise religious views in their assignments, if germane. These assignments should be judged by ordinary academic standards of substance, relevance, appearance and grammar.

8. Somewhat more problematic from a legal point of view are other public expressions of religious views in the classroom. Unfortunately for school officials, there are traps on either side of this issue, and it is possible that litigation will result no matter what course is taken. It is easier to describe the settled cases than to state clear rules of law. Schools must carefully steer between the claims of student speakers who assert a right to express themselves on religious subjects and the asserted rights of student listeners to be free of unwelcome religious persuasion in a public school classroom.

a. Religious or anti-religious remarks made in the ordinary course of classroom discussion or student presentations are permissible and constitute a protected right. If in a sex education class a student remarks that abortion should be illegal because God has prohibited it, a teacher should not silence the remark, ridicule it, rule it out of bounds or endorse it, any more than a teacher may silence a student’s religiously-based comment in favor of choice.

b. If a class assignment calls for an oral presentation on a subject of the student’s choosing, and, for example, the student responds by conducting a religious service, the school has the right — as well as the duty — to prevent itself from being used as a church. Other students are not voluntarily in attendance and cannot be forced to become an unwilling congregation.

c. Teachers may rule out-of-order religious remarks that are irrelevant to the subject at hand. In a discussion of Hamlet’s sanity, for example, a student may not interject views on creationism.

11. Student participation in before- or after-school events, such as “see you at the pole,” is permissible. School officials, acting in an official capacity, may neither discourage nor encourage participation in such an event.

"See You at the Pole"

10. Outsiders may not be given access to the classroom to distribute religious or anti-religious literature. No court has yet considered whether, if all other community groups are permitted to distribute literature in common areas of public schools, religious groups must be allowed to do so on equal terms subject to reasonable time, place and manner restrictions.

12. Students have the right to speak to, and attempt to persuade, their peers about religious topics just as they do with regard to political topics. But school officials should intercede to stop student religious speech if it turns into religious harassment aimed at a student or a small group of students. While it is constitutionally permissible for a student to approach another and issue an invitation to attend church, repeated invitations in the face of a request to stop constitute harassment. Where this line is to be drawn in particular cases will depend on the age of the students and other circumstances.

13. Student religious clubs in secondary schools must be permitted to meet and to have equal access to campus media to announce their meetings, if a school receives federal funds and permits any student non-curricular club to meet during non-instructional time. This is the command of the Equal Access Act. A non-curricular club is any club not related directly to a subject taught or soon-to-be taught in the school. Although schools have the right to ban all non-curriculum clubs, they may not dodge the law’s requirement by the expedient of declaring all clubs curriculum-related. On the other hand, teachers may not actively participate in club activities and “non-school persons” may not control or regularly attend club meeting.

The Act’s constitutionality has been upheld by the Supreme Court, rejecting claims that the Act violates the Establishment Clause. The Act’s requirements are described in more detail in The Equal Access Act and the Public Schools: Questions and Answers on the Equal Access Act*, a pamphlet published by a broad spectrum of religious and civil liberties groups.

14. Generally, public schools may teach about religious holidays, and may celebrate the secular aspects of the holiday and objectively teach about their religious aspects. They may not observe the holidays as religious events. Schools should generally excuse students who do not wish to participate in holiday events. Those interested in further details should see Religious Holidays in the Public Schools: Questions and Answers*, a pamphlet published by a broad spectrum of religious and civil liberties groups.

15. Schools enjoy substantial discretion to excuse individual students from lessons which are objectionable to that student or to his or her parent on the basis of religion. Schools can exercise that authority in ways which would defuse many conflicts over curriculum content. If it is proved that particular lessons substantially burden a student’s free exercise of religion and if the school cannot prove a compelling interest in requiring attendance the school would be legally required to excuse the student.

16. Schools may teach civic virtues, including honesty, good citizenship, sportsmanship, courage, respect for the rights and freedoms of others, respect for persons and their property, civility, the dual virtues of moral conviction and tolerance and hard work. Subject to whatever rights of excusal exist (see #15 above) under the federal Constitution and state law, schools may teach sexual abstinence and contraception; whether and how schools teach these sensitive subjects is a matter of educational policy. However, these may not be taught as religious tenets. The mere fact that most, if not all, religions also teach these values does not make it unlawful to teach them.

17. Religious messages on T-shirts and the like may not be singled out for suppression. Students may wear religious attire, such as yarmulkes and head scarves, and they may not be forced to wear gym clothes that they regard, on religious grounds, as immodest.

18. Schools have the discretion to dismiss students to off-premises religious instruction, provided that schools do not encourage or discourage participation or penalize those who do not attend. 20. Schools may not allow religious instruction by outsiders on premises during the school day.

Organizational Signers of “Religion in the Public Schools: A Joint Statement of Current Law” 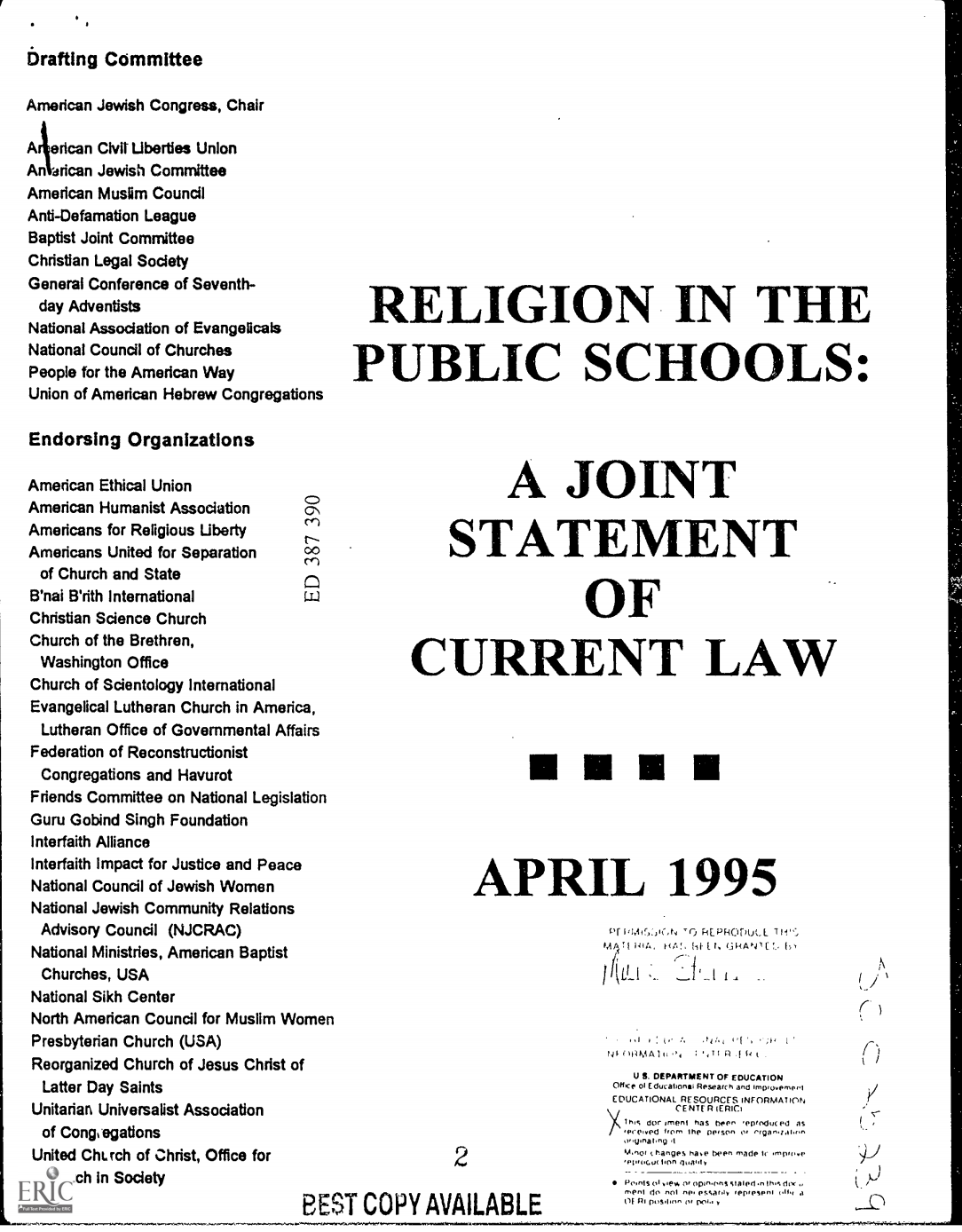