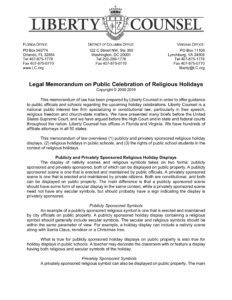 Public schools are not religion-free zones. Classroom discussion of the religious aspects of the holidays is permissible. A holiday display in a classroom may include a nativity scene or other religious imagery so long as the context also includes secular symbols. A choral performance may include religious songs. Indeed, the majority of the songs may be religious so long as the performance also includes secular holiday songs. If the students select their own songs independent of the direction of school officials, then there is no requirement that the songs include secular numbers.